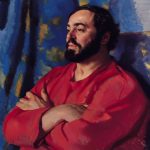 was named a winner in the Luciano Pavarotti International Voice Competition. During his final audition Mr. Sabella-Mills made history when Maestro Pavarotti stopped him in the middle of his aria (Cara Sposa, from Handel’s Rinaldo) and declared him an instant winner with these immortal words:

“David… you have prepared this aria very well. You will sing this aria very beautifully on the winner’s concert like you are doing now. I don’t have to hear to the end. This is excellent, not good, excellent!”  Luciano Pavarotti

In several roles throughout the evening… “David Sabella was a chameleon like presence.”
Bernard Holland, New York Times

“Sabella smoothly modulates his voice to suit the mood and style of the music at hand. His musicianship, like that of his excellent musical director Mark Hartman, is never in question. Their taste is always above reproach.” David Hurst, Show Business Weekly

…he emerges as an attractive performer with undeniable stage presence. This performer is a risk taker, and that fact lends an air of excitement to his show. By way of example, he takes a chance with an arrangement of “No Moon at All” (Evans/Mann) that is in direct opposition to the way the song is usually performed. And what a revelation! Quiet, delicate, introspective, the song takes on a wondrous new life. …keeps the audience alive with anticipation for each new number, curious and anxious to know what surprise awaits them around the next musical bend. …the show is carefully thought-out and well crafted. There is a sheen to this act that one doesn’t always find in the clubs around town. Barbara and Scott Siegel, Theater Mania.com

Mr. Sabella has always been an accomplished singer, Broadway and opera star, who is a pleasure to hear, but in this show, he proves himself to be a deft comedian with a mordant wit, wry perspective and that all-important perfect timing.   …fully emerging as a charming leading man with a sense of humor and a marvelous vocal facility-in all ranges. The songs showcase Mr. Sabella’s incredibly strong singing and his acting skill. Like Sutton Foster, the star of Thoroughly Modern Millie, Mr. Sabella is one of those rare singers who can take you into the heart of a song, simply and unselfconsciously, allowing the music and the lyrics to work their magic. Mr. Sabella consistently hits his emotional marks in ways that will surprise and move you. …a richly conceived evening that is a real delight and part of the vanguard of extraordinary cabaret performance. Chris Byrne, Gay City News

“His coloratura had a liquid flexibility, and he gave thoughtful dynamic shaping to his lines. His emotional approach to the role was particularly suited to the tomb scene in which he mourned the death of Pompey.” Lee Tepley, Virginian Pilot

“I must single out a special role…David Sabella proved to be a real spirit as the acerbic Prince Orlofsky.” Burt Saidel, Dayton Register